Stonewater Zen Centre (SWZ) is a part of the White Plum Asanga,  within the lineage of Taizan Maezumi Roshi (1931-1995)  who founded the Los Angeles Zen Centre. Maezume Roshi is considered a pioner of modern Zen, and found ways of making traditional Zen practice and teaching accessible to people in the "West" and in the present time.  SWZ is also affiliated to  Yokoji Zen Mountain Centre, Ca., USA. Yokoji is led by Tenshin Fletcher Roshi, a student of Maezumi Roshi.

SWZ is part of the Soto lineage drawing on Dogen’s teaching and also includes many Rinzai elements, for example koan practice.

Guro and Chris Huby are senior members of the Stonewater Zen Group, Liverpool, UK. (www.stonewaterzen.org). They have been practicing Zen together now for almost 40 years. They formally committed to Buddhist practice in 1981 when taking Jukai (receiving the Buddhist precepts) with Maezumi Roshi.

Keizan Scott Roshi
David Keizan Scott Roshi is an ordained Buddhist priest and lineage holder in the Soto Zen school, having received shiho (dharma transmission) from Tenshin Fletcher Roshi in October 2009. He is also a widely published writer on Japan, Zen Buddhism, comparative religion and cookery, and is a Fellow of the Royal Society of Arts. Roshi is based in Liverpool where he teaches and gives daisan (formal interviews) each week, and leads many sesshin (retreats) around the country.

Here is a short film about Roshi's life and work:


Born in Manchester, England, Charles Tenshin Fletcher Roshi went to the United States in 1979 to study at the Zen Center of Los Angeles with founder Taizan Maezumi Roshi. In 1994, Tenshin Roshi received Dharma Transmission (authorization to teach) in the White Plum lineage from Maezumi Roshi, and Inka from Genpo Roshi in 2006 (Zen Master, final seal of approval). He is now the primary teacher and abbot at Yokoji Zen Mountain Center near San Diego in the US. 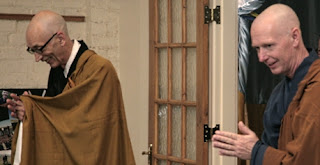 The beginnings of the lineage of Taizan Maezumi Roshi  (1931-1995) in the UK date back to the early 1980s, when Colin Fuko and Sumi Ryoko Barber set up the Zen Practice Centre in their home in Dulwich, in south-east London. Both had trained with Maezumi Roshi in the USA and Sumi says that Colin’s dream was to see Maezumi’s ‘White Plum’ Zen lineage flourish over here in the UK.

In 1980 Maezumi Roshi had given shiho (Dharma transmission) to Dennis Genpo Merzel Sensei and, at the Barbers’ invitation, Genpo Sensei gave a talk at the Rigpa Centre in North London and then led the first sesshin at Zen Practice Centre, in 1982.

The following year Genpo Sensei returned with Maezumi Roshi and a young monk heralding from Manchester, called Charles Tenshin Fletcher. There was a weekend sesshin at the Rigpa Centre (the house in Dulwich was too small for the number of people wanting to attend) and a longer retreat at the Manjushri Institute in Cumbria.

After this visit, Maezumi Roshi and Genpo Sensei travelled in Europe visiting other sanghas, and making connections with friends and supporters across France, Holland, Germany and Poland.  A number of members of the UK Sangha received Jukai from Maezumi Roshi on that visit, and two of the key decisions to emerge from the successes of that year were that the Zen Practice Centre Trust should be founded as a charity to work for the growth of Maezumi Roshi’s lineage in the UK and that Genpo Sensei would move to Britain to found the European Kanzeon Sangha.

Genpo Sensei and his family did come to England the following year, but they did not stay for long. In those days the British Sangha could not compete with the offer of a flat surrounded by a strong, dedicated group of practitioners in Amsterdam, and that is where the Merzels first settled. Even Holland was not a viable long-term proposition for Genpo Sensei, however, and in due course he returned to the USA, setting up residential centres first in Bar Harbor, Maine, in 1988-92, and later, after a sojourn in Oregon, in 1993, in Salt Lake City, Utah.

From 1983 onwards, the practice of the Kanzeon Sangha in Europe became focussed around three annual visits from Genpo Sensei and his entourage of senior students to lead week-long sesshin at successive destinations in England, Holland and Poland, plus occasional forays into Germany. This demanding schedule was interspersed with other, longer sesshin, such as an annual month-long retreat at Browfoot Farm in the Lake District, or at venues in Holland or Poland.

From 1985, until around 1993, almost all Genpo’s sesshin in England, apart from those at Browfoot, were held at Amaravati Buddhist Centre at Great Gaddesden in Hertfordshire.

Over New Year 1986-7 Genpo Sensei led sesshin at Gaia House, near Totnes in Devon, where he began to deliver the talks that were eventually to be transcribed in The Eye Never Sleeps  (Shambhala: 1991). He stressed the practice of shikantaza and the correct Soto Zen form and announced his intention to found a residential centre in the USA.

In 1988, he led sesshin at Park Gate high on the North Yorkshire Moors, near Preston, in a fine old farmhouse that Nancy Genshin Gabrysch had carefully converted into a retreat centre with help from volunteers in the Sangha. Park Gate narrowly avoided becoming the British Sangha’s first retreat centre when Genshin decided to sell the farm and give the capital to Genpo’s project in Bar Harbor, Maine.

Genpo Sensei first introduced his British students to his ideas about new teaching methods based on “Big Mind” in September 1986, when the sesshin did not follow the usual schedule we had become used to. Individual interviews with Sensei in daisan gave way to what he termed ‘group daisan’ and the idea of Big Mind was presented in a series of talks and guided meditations.  However, by the time of Maezumi Roshi’s return to Europe in 1987, Genpo Sensei had more or less reverted to the mix of koan and shikantaza used in Maezumi Roshi’s lineage and the sesshin schedule was following the Zen Center of Los Angeles model once more.

During this visit Genpo Sensei gave Jukai for the first time and Maezumi Roshi gave a series of wonderful teisho on Dogen’s comments on the Sutra of the Seven Wise Sisters contained in the Eihei Koroku. These talks, which Genpo Sensei later described as some of the most inspired he had ever heard Maezumi Roshi give, were eventually transcribed by Tenkei Coppens, and published as Teaching of the Great Mountain (2001 Tuttle).

Maezumi Roshi concluded his visit to visit to the UK by giving a memorial talk at Dharmadhatu in Clapham, South London, in honour of Trungpa Rimpoche, who had recently died.

The Barbers left London for Boulder, Colorado in 1988 and the organisation of the British Sangha passed into the hands of a wider group of Zen Practice Centre Trustees under the chairmanship of John Shodo Flatt (1913-94), who was to receive shiho from Genpo in the year he died.

Throughout these punishing years of extensive European travel Genpo Sensei was also putting a lot of stress on residential training for extended periods (Ango).  Two things slowly began to change. First, those of his senior European students who were able to do it gradually began to spend more and more time first in Bar Harbor and later in Salt Lake City, many of them taking shukke tokudo, to become monks, training to be shuso (head training monks), and subsequently becoming hoshi (assistant teachers); and secondly Sensei himself began to visit Europe less often.

With hindsight, 1992 probably marked the high-water mark for Genpo Sensei’s commitment to acting as the sole leader of sesshin in Europe.  That was the year of Maezumi Roshi’s final visit to Europe (he did not come to the UK that year), it was the year that Sensei’s first successor, Catherine Genno Pages received shiho in Poland (in Maezumi Roshi’s presence) and it was also at around that time that Genpo closed his centre in Bar Harbor.

In the following years Genpo Sensei began to lead the Autumn sesshin in England in place of Genpo Sensei and soon afterwards Dave Shoji Scott began to organise an annual sesshin in the north of England led by Tenshin Fletcher Sensei, who became Maezumi Roshi’s 12th Dharma successor in the year before Roshi’s death.

Anton Tenkei Coppens Sensei became Genpo Sensei’s third Dharma successor in 1996 and he too began to lead sesshin in the UK.

Genpo Sensei became Genpo Roshi in 1996, when he received inka from Bernard Tetsugen Glassman Roshi (Maezumi Roshi’s first Dharma successor),  and Genpo continued to lead annual sesshin in the UK until 1999, by which time he had decided to take a break from traditional Zen training methods and concentrate instead on teaching his Big Mind voice dialogue method.

By the beginning of the new century Genno Sensei and Tenkei Sensei were beginning to focus on the work of running their own centres in France and Holland and have over the intervening years withdrawn from directly leading sesshin in the UK. They received inka and the title of Roshi from Genpo Roshi in 2005 and 2006 respectively.

Meanwhile, in 2002, Dave Shoji Scott was made an assistant teacher (hoshi) by Genpo Roshi and with the continued help and support of Tenshin Roshi (who also received inka from Genpo Roshi in 2006) began to build a strong centre of practice for the British Sangha around Liverpool.  In 2006 Genpo Roshi gave shiho to Genshin Gabrysch Sensei, who returned to England in a teaching role after many years in Salt Lake City (Genshin was later to receive inka from Genpo Roshi; and is today  a Roshi, too). And then, in 2009, Dave Scott received shiho from Tenshin Roshi and became Keizan Scott Sensei.

It has taken tireless work by Genpo, Tenshin, Genno and Tenkei and indeed everyone who has supported the British Sangha these last decades to bring Colin Barber’s original dream to fruition (and sadly he has not lived to see it), but particularly with Dharma transmission from Tenshin Roshi to Keizan Sensei on UK- soil, in 2009, from a Mancunian to a Scouse (!), it’s safe to say that its moment has truly come.